skip to main | skip to sidebar

D is for Desperate

I have picked my next coupla sweaters I'd like to make. I even have the yarn to make both of them. Mostly.

I'm like a skein (maybe 2) short of one yarn and about 30 yards short the other. sigh.

I need one (maybe 2) skeins of Berroco Ultra Alpaca Lite in Ocean Mix colorway (#4285 and the dye lot I have is 701 but I'm not all that concerned with dye lot).

Also, I have an idea for some mittens I'm designing and am desperately looking for one (maybe 2 but definitely at least one ) skein(s) of Koigu P315. It's the KPPPPM koigu.

I've been lurking on Ravelry's destash group with no success. I have also contacted some other ravelers that have the stuff I need. Again, without success.

Also, it's not available locally as far as my phone calls to all the nearest yarn stores tells me and I'd rather pay shipping to some imaginary friends (the bloggers) then to stores far afield. Just sayin'.

Hey, how do you guys feel about this issue? My friend, K, says she finds it very irritating when strangers email her to ask if she's willing to give up something in her stash. She says if she was, she'd put it in the trade/sell part of her stash page. I say, I've asked people before if they'd give some yarn up if I needed it and some have been very willing to help! I feel it doesn't hurt to ask!

And I never ask them to just give it to me. Same here, if you guys have this stuff, I'll buy it off you! My email's on the left there under my face.

Lurking in your Ravelry stash, Ruth!

ETA: Someone on Ravelry is letting go of her Ultra Alpaca Light in Ocean Mix - yay!
Still seeking the Ultra Alpaca in Carnelian and the Koigu.....

4/28 I got the Koigu from my excellent SP13 partner! Still looking for the Carnelian Ultra Alpaca....
Posted by 5elementknitr at 8:55 AM

Aargh. I just got cut off as I tried to post.

I don't have any of the things you're looking for, but I'll be happy to look the next time I'm at my not-so lys. Have you posted and ISO on the Rav destash page? I'm often surprised at how well that works. And I don't think there's anything with asking if someone's willing to sell from stash, as long as you offer a reasonable price and aren't pushy about it. I did that once and it worked well.

I don't have the colors you're looking for-

If you don't find them, my not so LYS, Yarns Unlimited has a nice collection of Ultra Alpaca Light

They also have plentiful Koigu

I'm not offended by someone asking me- I have so much yarn in my stash that may or may not get used that you just might be asking for something I'm looking to get rid of.

I don't have anything that you're looking for, alas.

As for the asking for something from someone's stash, I'd be offended if someone did that to me, but seeing I haven't logged in to Ravelry in about 6-8 months, there's no way for me to know if anyone has or not :)

I wish I could help, but I don't have those.

I'd say it can't hurt asking folks on Ravelry. I've been lucky this way. And I've had no problem with folks who have contacted me in the past. (Well except for the person who was asking if I wanted to trade 20 skeins of my Rowan tweed for 8 skeins of something that wasn't comparable) LOL! Gotta give the girl props for trying though!

Other than that, I'd say Google might have to become your best friend for a couple of hours.

I've had people contact me about my stash items, and as long as they are polite and not overly aggressive, I don't mind. Sometimes they have something I really like and we both end up happy.

I would throw out an ISO link. You never know what people are looking to give up. Also try knitty.com. I've had good luck there.

Too bad I don't have any of them. I'd totally hook you up!

I, personally, would never be offended if someone asked to purchase some yarn in my stash, as long as they took a "I can't bear to part with that yarn" gracefully, or they didn't offer below retail for it (if you are seeking something out of someone's regular stash, I think you should be willing to pay retail). I really don't understand why people get offended by it. If people going through my stash and wanting to purchase something that they were looking for offended me, I wouldn't use the stash feature at all at Ravelry.

Good luck finding what you need!!

Yeah, it wouldn't bother me. Depending what it was, there's a good chance I'd say no, but if they were polite, I wouldn't be offended.

As for marking it for trade...I only put that on relatively 'intact' skeins. If it's a partial skein, or something I yanked out a bunch to swatch with it seems rude to say 'oh yes, I am in fact willing to part with these junky lefovers'. But depending on how much someone was short of a discontinued color, maybe that's all they need.

Wish I could be H is for Helpful...but alas, I have nothing that matches your wants.

It only bothers me if they act as if I MUST help them.

Can't promise I will find it for you, but I'll check my LYS for that color. 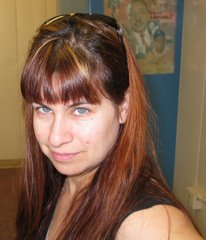 Drop Me A Line

This blog doesn't insist on getting your email. I wish it did so I could respond to my lovely commentors.

My email is Ruth AT 5elementknitr DOT com. For when you've dropped a stitch miles from your crochet hooks at home! Click on the pic for more information.